Goyder Representation Review – YOU HAVE TO BE QUICK!

Innocent notice in newspaper does not describe the importance of what is about to happen for electors of the Eudunda Ward at Regional Council of Goyder. It’s not the adverts fault by the way; that hardly anyone in Eudunda would take notice, yet the ramifications to our Ward are huge.

Surprisingly there has been little in the way of publicity or talk about this review.

The title of the web page on the RCOG website states
Have your say – Representation Review Options Paper | Goyder Regional Council
and ‘Council wants your view!’ (26th November 2020).
The advert was also in “The Leader” and “Plains Producer” newspapers on the 25th Nov 2020
It was also an Appendix 2 in the Ordinary Meeting of Council 17 Nov 2020. Nothing on Facebook!

The web page did not include a link to the actual important document – so here is the link.
Representation Options Paper – ELECTOR REPRESENTATION REVIEW – November 2020
Note that the link may not be available later if the Council website changes. (active at 11/12/20)

When examining the document things become clearer as to it’s importance for Eudunda Ward Rate Payers, so please take time out to read it.

YOUR Farm, YOUR Business, YOUR Club, YOUR Services, YOUR Rights depend on the outcome of this document and review getting a fair airing, and fair voting.

In very brief summary:
The council is having a representation review, as the Eudunda Ward has too many electors for the number of  councilors in the Eudunda Ward compared to the other 3 wards. There are 4 options  proposed:

You should review the whole document

Several people who have become aware of this review feel that the review release has been badly timed. Considering Council passed a resolution to proceed in March 2020, but the document was only brought to Council in late Oct 2020, there is now a rush to get it pushed along, it seems a shame that it has been timed in such a way as to be easily overlooked by the general elector population of the district.

The fact that the Eudunda Ward is made up largely of farmers and businesses related to farming, and that this time of the year is the busiest in the farming year seems to have been neglected by decision makes as to when to set this review in motion.

Most farmers and support industries are working very long hours at present to bring in their crops, or to support those who are. Farming has everyone working hard, so it begs the question of if this is indeed going to be a fair review.

The question is;
Is it fair to ask for community submissions at the busiest time in our region?
When electors have little time to notice the advert, (precious time has already gone by) and now less time to find out what it is all about, let alone find time to discuss with anyone, to ask questions, get replies and do research, to make informed decisions and to write a submission in time.

And then we see the Annual CLOSURE OF COUNCIL OFFICES DURING CHRISTMAS, which also cuts into much of the time people have left to make inquiries and submission, adding to the dilemma that voters of the Eudunda Ward face in attempting to get fair debate about representation.

Time is needed to examine all aspects of the options and facts as to why those options were chosen.

Within the review options paper itself appears to be at least one glaring misunderstanding of Eudunda’s overall long term plans and this may affect negatively judgements and outcomes for anyone reviewing it.
7.2.2 Residential Development
There are no indicators to suggest that there will be any significant additional residential development and/or residential rezoning within the Council area within the foreseeable future.

The above statement is misinformed! Eudunda has been wanting to continue to develop the Northern Subdivision. Stage 1, was originally started back in the early 1980’s under the Eudunda Council and the result was Eudunda’s Park Drive and Sheoak Crescent, as well as Nicholson Park.

The Eudunda Community, Business and Tourism (ECBAT) has been campaigning for approximately the last 18 years to get support to continue the development, aware that Eudunda will be unable to expand without the next part of the sub-development going ahead. The community recognised early on that Eudunda’s survival depended on growth. ECBAT have has written statements for the town’s sub development in Regional Council of Goyder focus and documents from an early ‘Development Plan Review in 2003” and has continued to campaign to have the sub development supported ever since.

It is fair to say that many things have stalled that effort, such as several slumps in the economy, causing a freeze in developer investment interest and problems in design of the sub development plans with effluent and then floodwater issues since more stringent design rules have come into play. Although the Council has not shared ECBAT’s enthusiasm for the sub development, ECBAT has continued to campaign for the development by including it in the “Goyder Master Plan”, and is likely to continue to do so as it is a critical factor in Eudunda’s development.

The future is brighter for development, as COVID has caused a scare in the cities, now there is greater interest from young families wanting to move to the country to live in an open and safe environment. Eudunda has those attributes and is an ideal location, within easy travel of the city and environs. These families want bigger blocks and this has been a suggestion to Council as an option to attract new developer and customer interest. Further growth in the Eudunda Ward population should not be ignored.

What effect could that negative statement have? One thought is that the fourth option of the review is to decide if an extra councilor could be elected to even up the representation across all wards. With a statement suggesting that there would be no expansion of electors in the foreseeable future – people are less likely to consider that an extra third councilors might be a feasible way to represent the Eudunda Ward. It is an option now that point 7.2.2 has been debunked.

One wonders if the community have time to dig deeper what other questions we will be able to ask, and facts we might find to get a better understanding of the issues.

One must have some thought for the authors and recognise that it is not easy to make any summary document such as the Elector Representation Review. The author has tried to summarize all alternatives as best they could with what they were aware of. What is a shame is that within the 7 months the document was being prepared, that the authors and Council did not seem to make any attempt to consult with the ‘customers’.

As the representatives for the district to Council, ECBAT should definitely have been consulted early on, and the error in 7.2.2. would not have occurred.

It is hoped that Council will see the opportunity to allow more time for the residents, when they meet on the 15th December for thier Council Meeting at1pm at the Burra Council Office. 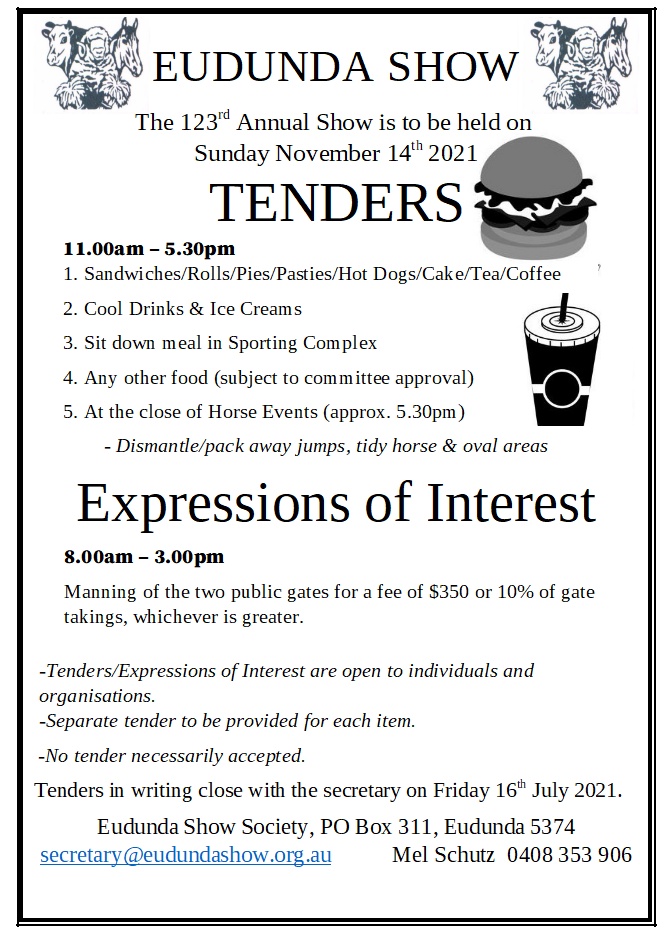 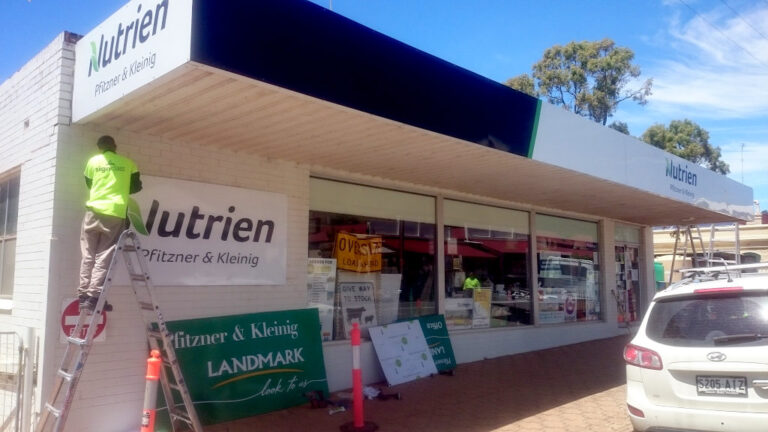 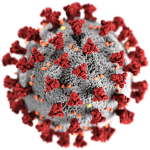 As the community gears up for summer sport and recreational activities, there are measures that your Organisation/club will need to put in place to help stop the spread of COVID-19 in the community. Many of you will already be aware of these measures but for those gearing up for the summer season please note the… 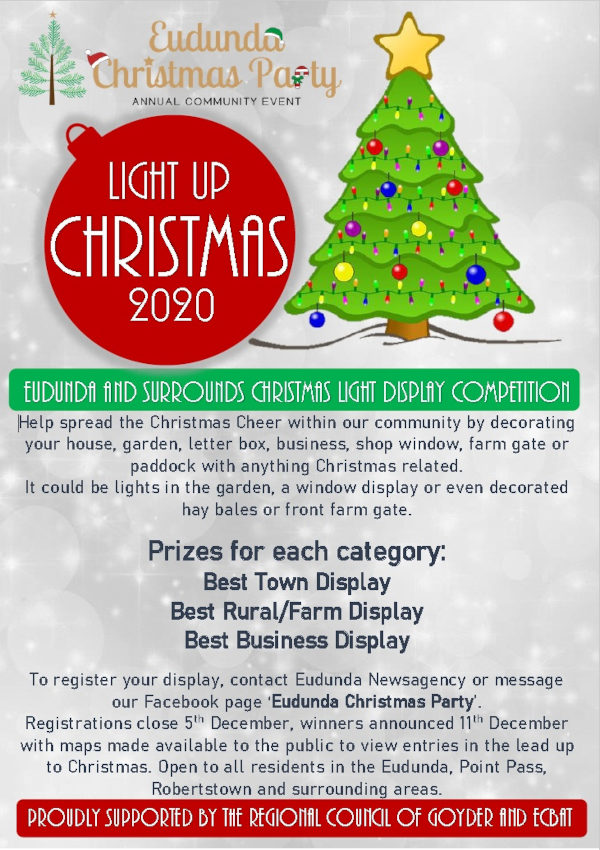 With the Registration deadline of 5th December you had better get registered quick. With the late cancellation of the Santa’s Magic Cave due to COVID, it is even more important that you get involved in this Christmas Street party initiative as the ladies are still able to run the ‘Light Up Christmas 2020’ Competition for…

We hope you have enjoyed the news in this newsletter (Southern Goyder News).If you would like to get the news from the Goyder Council as well click the link below which will take you to their archive. Click on the top one on the list for the latest news. Regional Council of Goyder 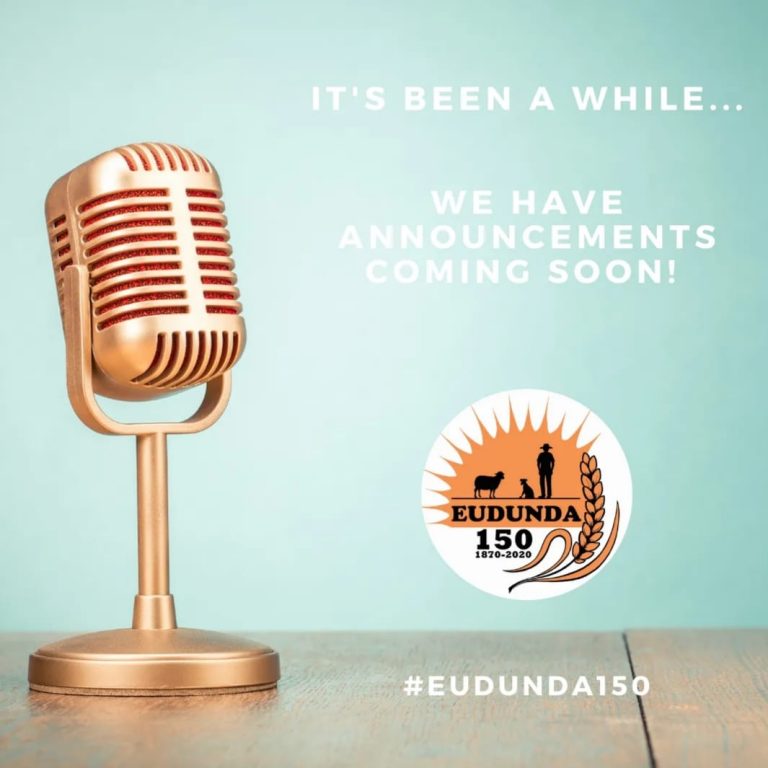 Members of the Eudunda 150th Celebrations Committee recognise that the COVID-19 Pandemic stalled the district’s celebrations, but the sacrifice was worthwhile in keeping everyone safe. The Committee have had a meeting and see a path forward, with modified celebrations and some permanent fixtures to celebrate the Eudunda 150th. You will receive TWO Fliers wrapped together…